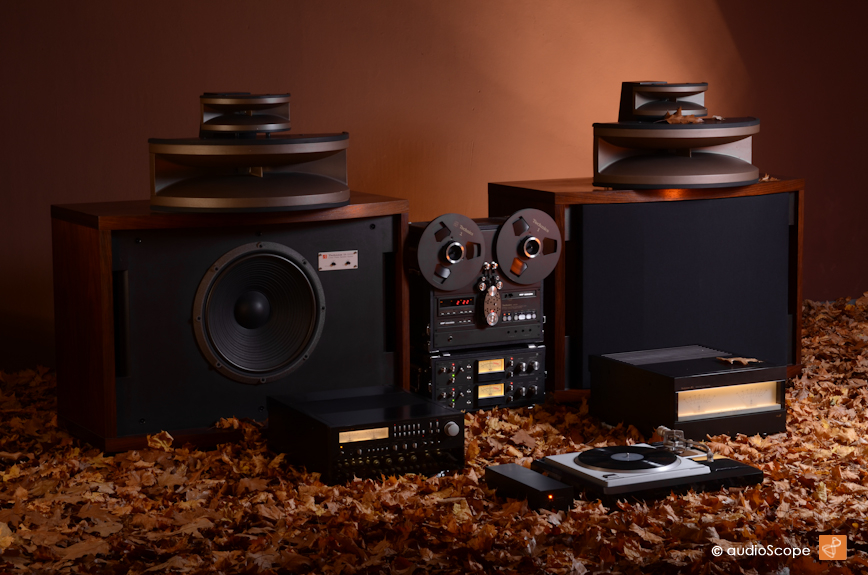 The evolution of the Technics SL-1200 turntable – an interactive timeline.

OSAKA, Japan THE formula was set some six decades ago. A maverick entrepreneur, who had been orphaned as a child and quit two jobs before starting his own business, began with a grubstake of less than $100 and an electric light socket of his own design. When the business failed, he pawned his wife's kimono to stay afloat and designed an electric plug.

That plug will never be mentioned in the same breath with Thomas Edison's lightbulb, but it sold for 30 percent less than plugs made by rival companies, and rescued the faltering fortunes of a man who is by now the best known and most respected businessman in this country - 88-year-old Konosuke Matsushita, often called ''the Henry Ford of Japan.'' That plug also marked the start of the Matsushita (Mat-soosh-ta) Electric Industrial Company, the world's largest maker of consumer electronic goods.

The Matsushita empire today includes 39 manufacturing operations and 28 sales companies throughout the world. Its 14,000 different products, ranging from rice cookers and vacuum cleaners to video cassette recorders, stereos, and televisions, are sold in 130 countries. Twenty-two years after the company began its entry into the American consumer market - by selling high-quality transistor radios through R.H. Macy & Company in New York - its Panasonic and Quasar brands have become household names in the United States. (It also sells under the National and Technics brand names.)

Despite its enormous size, the company's performance in the marketplace has been nimble in recent years. From 1977 through 1981, sales increased 77 percent over all, to $13.9 billion, calculated at current exchange rates. During the same period, net income doubled, to $629.4 million.

But the era of double-digit growth may be at an end for Matsushita. Most analysts expect the company's earnings to grow by only 5 to 6 percent in the fiscal year that ended Nov.30.

In part, the slowdown is due to the worldwide recession and the consequent weakness of the Japanese economy. But Matsushita may also be coming up against a problem potentially more troublesome than a cyclical slowdown. Analysts agree that high growth in Matsushita's traditional consumer electronics business will be increasingly difficult to attain in the years ahead, especially with the end of the boom phase in sales of video cassette recorders.

This would indeed pose a challenge for the electronics giant. Matsushita is, in the words of Hiroshi Ebihara, a Tokyo management consultant, ''an ultra-Japanese company,'' with a genius for what Japanese management experts call the ''followership'' strategy. JAPANESE companies as a whole have employed the strategy, in one f orm or another, in industry after industry. Often latecomers, they h ave used astute marketing techniques, product differentiation and l ow-cost manufacturing as the keys to international success in such b usinesses as motorcycles, television and cars.

Matsushita has long had a reputation for such followership, though some call it simply caution. It has let other companies blaze the trail with new products. Then, once a market starts to develop, Matsushita moves in and grabs a large share of it. Typically, Matsushita's product line is a bit different and a bit less expensive than those of its competitors - just as that electrical plug was 60 years ago.

Matsushita is already casting about for new growth lines in such nonconsumer fields as office automation and robotics. It is the company's moves into the personal computer business that have probably been most closely watched by industry analysts. The potential market for Matsushita in personal computers is enormous, at least in theory. The company's worldwide marketing clout, not to mention its 26,500 retail shops in electronics-oriented Japan, combined with its production capability, would seem to leave it wellpositioned to capitalize on the growth in personal computer sales.

Some analysts have even forecast that a decade from now Matsushita, along with the International Business Machines Corporation and the Nippon Electric Company, will be a giant in the personal computer market.

But Matsushita has a long way to go. Its president, Toshihiko Yamashita conceded: ''We are not so strong in this business.'' Last November, the company introduced its first personal computer, which sells for about $220. It then brought out a more powerful 16-bit model this summer, which retails for about $320. Its Panasonic line in the United States will soon introduce the 16-bit model in the American market, along with 40 or 50 software programs. Other entries are planned.

A big problem for Matsushita and other Japanese companies hoping to crack the American personal computer market is software. However, there are some signs of hardware standardization developing in the personal computer field. If that trend continues, then Matsushita might do quite well, analysts said, because the personal computer would then become a ''commodity'' item with interchangeable software, as the video cassette recorder is today. BUT Matsushita has not yet impressed analysts in Japan. ''Nippon E lectric, Sharp and Sord are the names here in personal computers, n ot Matsushita,'' said Darrel E. Whitten, of Bache Halsey Stuart S hields Ltd.

To come up with new products, Matsushita has increased its research and development spending from $407.5 million in 1980 to an estimated $602 million this year. More than 1,000 people were added to the company's R.& D. staff last spring, bringing the total to 16,000.

One of Matsushita's wisest moves in the past was to become a producer, not just of finished electronic products, but also of component parts that could be sold to its competitors. For example, as semiconductors - instead of transistors - became the basic technology for more and more consumer electronics items, Matsushita made sure that it developed in-house production capability. With components becoming more sophisticated and expensive, Matsushita can both save money by making them itself, and reap substantial profits by selling them to rivals.

''If we were to buy microprocessors and similar components from other companies, it would be the same as buying finished products,'' said Mr. Yamashita, the president.

Matsushita's sales of electronic components to outside customers alone totaled $1.3 billion last year. That same strategy is expected to pay off eventually in another area - factory automation. There are roughly 3,000 robots in Matsushita plants at present. A decade from now, the company plans to have more than 50,000 in its factories and expects other companies to move in the same direction. Thus, Matsushita began selling robots to other companies last year and a new line of assembly robots went on sale in June. Already, Matsushita claims about 10 percent of the Japanese robot market.

''T HE company is defraying the costs of developing its own machine tools and robots by selling them to other people,'' said Michael Connors, an analyst for Jardine Fleming Ltd. in Tokyo.

Matsushita's sales of robotics and factory automation equipment will total about $80 million this year, according to Koichi Ogawa, a senior analyst for the Daiwa Securities Company. By 1987, the figure should grow to more than $400 million, Mr. Ogawa estimated. ''This should be a real bright spot for Matsushita,'' he said.

Despite the branching out, Mr. Yamashita makes it clear that he also foresees growth in such mature products as color televisions, as new technologies are applied. For instance, high-definition and liquid crystal technologies should result in sets that hang on the wall like a painting and televise a three-dimensional picture.

''That is just one example,'' Mr. Yamashita said. ''There will be a change in many basic household products due to the application of new technologies.'' To which Mr. Connors, the Jardine Fleming analyst, replied: ''Sure the flat-screen TV will have its run. But over the long run there isn't going to be a lot of growth in consumer electronics. Matsushita recognizes that. Ten to 15 years out, Matsushita will have to be a substantially different company than it is today. We're starting to see the beginning of that change.''

One area of change concerns overseas production. Matsushita is sensitive to charges that its exports take jobs away from workers in other nations. As a result, Matsushita, like many Japanese exporters, has been shifting a lot of its production base abroad.

''Matsushita, and Japanese companies generally, have to be very careful about exports in the future,'' Mr. Matsushita said recently. MATSUSHITA:THE LEGEND

OSAKA, Japan Octogenarian Konosuke Matsushita, right, patriarch of the company that bears his name, attributes his success in business partly to ''always asking myself what is the true nature of a human being.''

But, he quickly adds, ''I don't know the answer to that question. That will take me another 50 years, so I plan to live that long.'' Many people, both inside and outside the company, hope that Mr. Matsushita can somehow manage that feat. ''I think it is a key consideration whether the company will lose some of its vigor after Konosuke Matsushita passes on,'' said Darrel E. Whitten, an analyst for Bache Halsey Stuart Shields in Japan. ''He's the demigod there, the living legend, the patriarch.''

While he gave up day-to-day control of his giant company in 1973 to become executive adviser, Mr. Matsushita, who just turned 88, still goes to the office every day. But he acknowledges he has made some concessions to age.

''I take it a little more easy these days; sometimes I leave early,'' he said. ''Frankly, not too many people come for my advice anymore,'' Mr. Matsushita said, dubbing his new position that of ''silent adviser.'' Still, he added: ''I think that showing my face is important.''

Odd as it may seem to Westerners, there is a strong family-like, bond in many Japanese companies, and a loyalty to the enterprise and to each other that seems to have the character of a religious devotion. Chief executives often talk of their responsibility for the spiritual well-being of their employees.

Each morning, 80,000 Matsushita workers at factories and offices throughout Japan join in reciting the seven company objectives: national service through industry, fairness, harmony and cooperation, struggle for betterment, courtesy and humility, adjustment and assimilation, and gratitude.

This is followed by the singing of the company song, entitled ''Love, Light and Dream.'' It includes lines such as: ''Time goes by but, as it moves along, each day brings a new spring.''

Matsushita is a prime example of what Hiroshi Ebihara, a management consultant, refers to as the ''Osaka corporate culture,'' whose lowcost producers stress close-knit teamwork, production engineering and inventory control.